I've decided I need to be more regular in my blogging. To try and help me keep me on track I'm going to use some blogging prompts from Geneabloggers.com so for today its the turn of Tombstone Tuesday.

This is a photo of the first gravestone I found when I started my family tree research.

When my grandfather died in 1995 we were clearing out cupboards and I found various photos and documents including birth and marriage certificates, old newspapers and lair records. 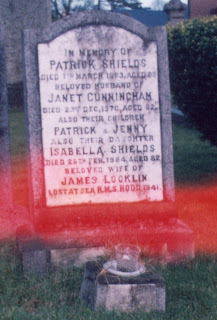 Later, while visiting the cemetery to see my Grandfather's headstone, I used the details on the lair records to find my great grandparents headstone (pictured left).

This stone was a great starting point for my research and gave me lots of information for my initial family tree.

The red glow on this photo is not ghost related but due to light getting into the film in my camera in the days before digital.
Posted by Joanne at Tuesday, November 16, 2010