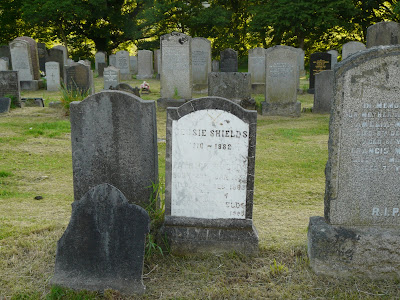 This week a gravestone from my Shields side. My grandparents Jessie Duncan & Matthew Shields and their son my Uncle Patrick Shields. The blacking in the lettering has worn away but is still readable close up. I'll need to investigate the cost of getting the lettering redone.

This stone is in the High Kirk graveyard in Rothesay, Bute.

Don't you just love Photoshop?
Before 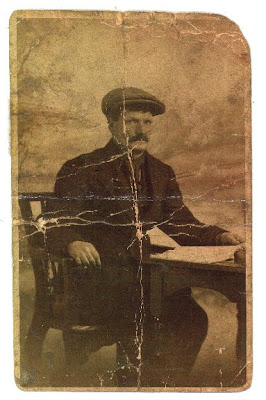 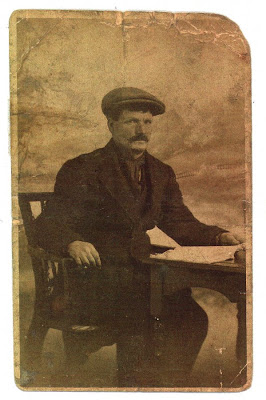 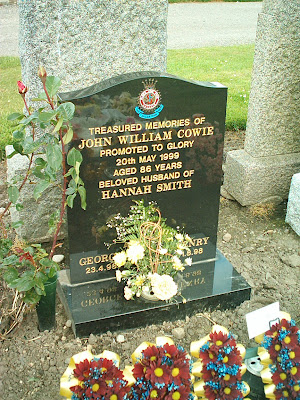 Another gravestone from my Cowie side of the family. My Grandad John William Cowie also on the stone is my Gran Hannah Smith and my Uncles George and Henry who died four months apart in 1998.
This was taken in Burnside Cemetery at Rathven outside Buckie in Banff.
Posted by Joanne at Tuesday, July 12, 2011 No comments:

Banffshire Advertiser, Tuesday, May 25, 1999. Page 7
Promoted to Glory
Dearly loved and highly respected citizen of Buckie 'Johnny Coupie' has died aged 86.
Buckie residents old and young will remember him as the cheerful whistling baker and later road sweeper who made Buckie and the Salvation Army his life.
Born and brought up in the town, 'Coupie' (real name John Cowie) went to school at what is now Buckie High School.
During the war he served in the Home Guard in Buckie as Lieutenant. After the war he took up the trade of baker which he carried on for many years while working in bakeries in the town.
He and his wife also ran a grocery shop, for some years, from their home in Cluny Terrace which bordered also onto Seatown.
He married his wife Hannah nearly sixty five years ago. They had three daughters, Elma, Jackie and Iris May. His two sons George and Harry both died last year.
When adding up his children, grandchildren, great-grandchildren and great-great-grandchildren, the resulting number is 70!
He frequently used to joke about his large extended family saying: "They can all come to the house as long as they don't all come at once."
When his eyesight deteriorated he took up the post of road sweeper and was well known for whistling hymn tunes as he went merrily about his work.
He knew a lot of hymn tunes due to his many years spent in the Salvation Army which he joined after being converted in 1950.
Many people will remember seeing him in his uniform faithfully selling the 'War Cry' in pubs from Portgordon to Strathlene.
In his younger day he was a keen camper and cyclist and enjoyed taking his two sons with hi.
After his cycling days, the took up riding a motor scooter and would frequently be seen along the streets of Buckie in full uniform, including his Salvation Army bonnet, because helmets were not compulsory at the time.
He retired at the age of 60 due to his failing sight but he continued as a regular supporter of the Salvation Army up to the day of his death.
He insisted that because he had served the Lord in all weathers, his funeral should be conducted in the open-air. It took place on Monday, 24 May, outside his home. It was followed by a procession led by a band. He was buried at Burnside Cemetery, Rathven.
Coupie will be remembered as a dying breed, of great quality, by all who knew him.
~ ~ ~ ~ ~ ~ ~ ~ ~ ~ ~ ~ ~ ~
One correction to this is that he had only two daughters and three sons. My father, John William Cowie is known as Jackie, but is definitely male :)
~ ~ ~ ~ ~ ~ ~ ~ ~ ~ ~ ~ ~ ~ ~ ~ ~
This is the second Obituary that I've found in my family research with errors. I would therefore classify Obituary's as Secondary Sources and always attempt to verify the facts that you find in them.
Posted by Joanne at Sunday, February 27, 2011 No comments:

52 Weeks of Personal Genealogy & History.
Week 1: New Year’s. Did your family have any New Year’s traditions? How was the New Year celebrated during your childhood? Have you kept these traditions in the present day?
When I was younger Hogmanay was a time for family and friends. One tradition was the house had to be clean and tidy by midnight the plan being to start the year as you meant to go on so after the fun of Christmas it was a frantic couple of days tidying and organising before 'the bells' at midnight. We always saw in the bells at our own house, you had to have a drink to toast the new year and something to eat to ensure plenty of food for the rest of the year. Then we would visit my grandparents or friends as their first foot. You always took a bottle of something to the house and then it was a couple of hours chatting, sometimes singing, and telling stories, before walking home in the early hours of the morning.
Posted by Joanne at Sunday, January 02, 2011 1 comment:

I've not been as regular at my family history research as I'd like and I've not used my blog as much as I planned so I was very pleased to see some help will be available this year from Amy Coffin of the We Tree blog (http://wetree.blogspot.com/) in the shape of weekly challenges entitled 52 Weeks of Personal Genealogy and History and I hope to do these challenges each week on top of some of the other weekly topics.
Posted by Joanne at Sunday, January 02, 2011 No comments: