Researching the Mcleod line back with the help of information from other family members and hebridean connections has taken me back to Neil Macleod, also known as Niall Mhurchaidh Bhàin who lived from around 1756-1800 on Lewis in Scotland. 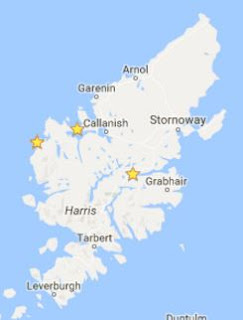 He was from Mangersta, and left the village for Vuia Mhor. He was married to Catherine Mackenzie and they lived on Vuia Mhor where they raised a large family. Ten of their children emigrated to Cape Breton in the 1820s.

However two of the children stayed in Lewis both called John.

The elder John known as Iain Og married Mary Smith, also from the island, and continued to live there. John is said to have died on Vuia in his 60s, which must have been around 1840. The island was cleared then and his widow, his son John (also Iain Og) and a daughter left the island.

The younger John (1783-1869) was my 3rd great-grandfather. He married Margaret Macarthur and later married Marion Smith from Valtos, Uig.
He was a witness for the defender at the second hearing of the Lewis/Harris boundary dispute (his grandfather Murdo was a witness at the first hearing).
John and Marion lived in Balallan, Lochs as did their son Malcolm and his daughter Ann before she moved to work in Glasgow and married William Duncan. Ann was my great-grandmother.


I know some of the family still live up in Lewis and would love to visit sometime
Posted by Joanne at Thursday, December 15, 2016

My great grandfather was Malcolm Macleod and he married Mary Ann Macleod in 1878. i.e. your great granny's brother. They lived at 10 Balallan. One of their 9 children was my grandfather Angus. He married another Mary Ann Macleod, (popular name even Donald John's mother was a Mary Ann)and they lived at 4 Kershader. My mum, Christine Isabella, married John Timmins, my dad. Mum (deceased) has two sisters still alive. Auntie Mary (aged 88)lives in Tarbet Harris, 4 of her 5 children live on Lewis. My other Auntie Dinagh lives in Redcar with one son. I have other Macleod cousins on Lewis on our side of the family and lotson the maternal side.
best wishes
Angus