This week a stone from the Slaven side of the family.


This impressive stone is in the High Kirk Graveyard on the isle of Bute. 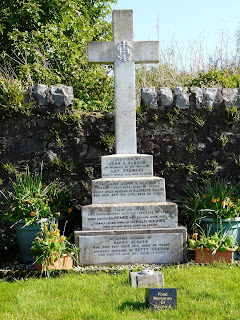 When Sarah died Lily appears to move in to help with the family and although they never married she had a number of children with Henry Slaven her brother-in-law.

This remarkable stone is erected by her son John Stewart Slaven and manages to chart his family through the years.